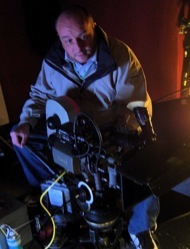 One can get a small taste for Richard's good humor by browsing his website.
Written by SteadiShots at 8:17 PM 1 comment: 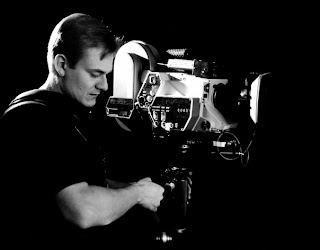 Do you remember the first time you saw or heard of the Steadicam?
I was just out of college. I met Charles Papert who was DPing a corporate shoot.

What was it about the Steadicam that made you want to pursue it as a career?
The magic and physicality of it.

What were you doing prior to Steadicam?
I was an electrician. I wanted to become a cameraman. I was working in a kalideoscope factory.

What were some of the biggest challenges you remember about becoming a Steadicam operator?
Being able to afford it. Getting yourself known – figuring out how to publicize yourself. Getting to know other operators.

What are some of the biggest challenges now?
Longer format jobs put you unavailable for long periods of time and take you off the radar of many jobs.

Did you ever have a “big break’ moment? A career event that clearly changed or paved the way for everything to follow?
DP Tom Houghton offering me a job on “Love Monkey”. It paved my way into episodic work.

From whom do you take your inspiration? Has that changed over the course of your career?
My wife, Garrett, Charles, and young students. They aren’t jaded…the sky’s the limit…no obstacles…they have pure excitement.

Is there a shot, film, or moment in your career that you can think of as your most proud?
A lot of moments for different reasons. “Rescue Me” oners were the most rewarding in their sheer physicality and logistics. I felt I was really able to tune into the look of the show and elevate it.

Is there a shot or film you can recall as being your most challenging? Why?
The hardest shots are frequently the ones that initially seem to be the easiest. I’m proud of the “Levis” spot – watching it come together exactly as I’d planned was great. I’d visualized it in prep and then “connected the dots” on set.

What work of your peers do you admire?
So many. Larry, Garrett, Charles, Jimmy Muro… The opening shot of “Bonfire” is operating at a different level.

Many people will say they’ve tried on a Steadicam once, and immediately thought, “absolutely not.” What do you think is different about those of us that say “absolutely”?
A love for physical and mental challenge. Steadicam is a perfect hybrid of the two. We continue to roll up our sleeves and humble ourselves with this instrument.

Alec regularly lectures about camera movement and offers Steadicam demonstrations at NYU. Alongside Steadicam Inventor Garrett Brown, Alec has taught weeklong workshops in the art of Steadicam. Alec is honored to serve on the Board of Governors of The Society of Camera Operators, as well as being an active participant in The Steadicam Operators Association, the Steadicam Guild, IATSE Local 600, and to serve as a moderator for SteadicamForum.com. Alec currently resides in New York City with his wife, Jendra Jarnagin, who is also a Cinematographer.

Written by SteadiShots at 9:57 AM No comments: